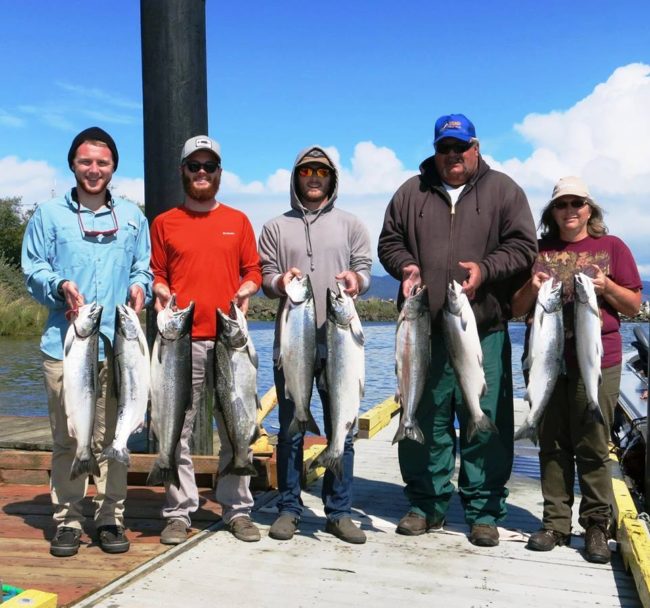 The Oregon Coast offers an overabundance of salmon fishing and Steelhead fishing. For instance Tillamook Bay is one area to fish on the Oregon coast, and it might be the most famous fishery that  Oregon Fishing has to offer.

Tillamook County has an overwhelming amount of fisheries with in a short distance from another. The Wilson River, Trask River, Kilchis River, Miami River and near by systems such as the Nehalem Bay / Nehalem River and the Nestucca River.

It is crazy to have so many great salmon and Steelhead Fishing locations for so close to one another!

Astoria Oregon Fishing Guides all probably agree that Astoria Oregon is probably one of the best places to fish on the West Coast, located 10 miles east from where the Columbia River meets the Pacific Ocean. Astoria is a prime location for Salmon Fishing, Sturgeon Fishing, Steelhead Fishing and Crabbing.  Astoria is a great place to be for a if you are looking to catch a lot of fish. Starting around the first of June for Astoria Sturgeon fishing and Steelhead Fishing.  Guides who fish Astoria will start fishing in the Pacific Ocean usually on the first of July doing Salmon Charters and will follow the Salmon into the Columbia River.  The Columbia River Salmon Fishing in Astoria Oregon usually starts on the first of August.

Clackamas River Fishing offers anglers with an almost year around fishery. Winter Steelhead Fishing between November – March. Spring Chinook Salmon Fishing  in April – June. Summer Steelhead Fishing the beginning of May and will fish through the summer months. Fall Salmon Fishing, both Chinook Salmon and Coho Salmon Salmon showing up in September and fishing into November. The Clackamas River is a great Oregon Fishing river!!!